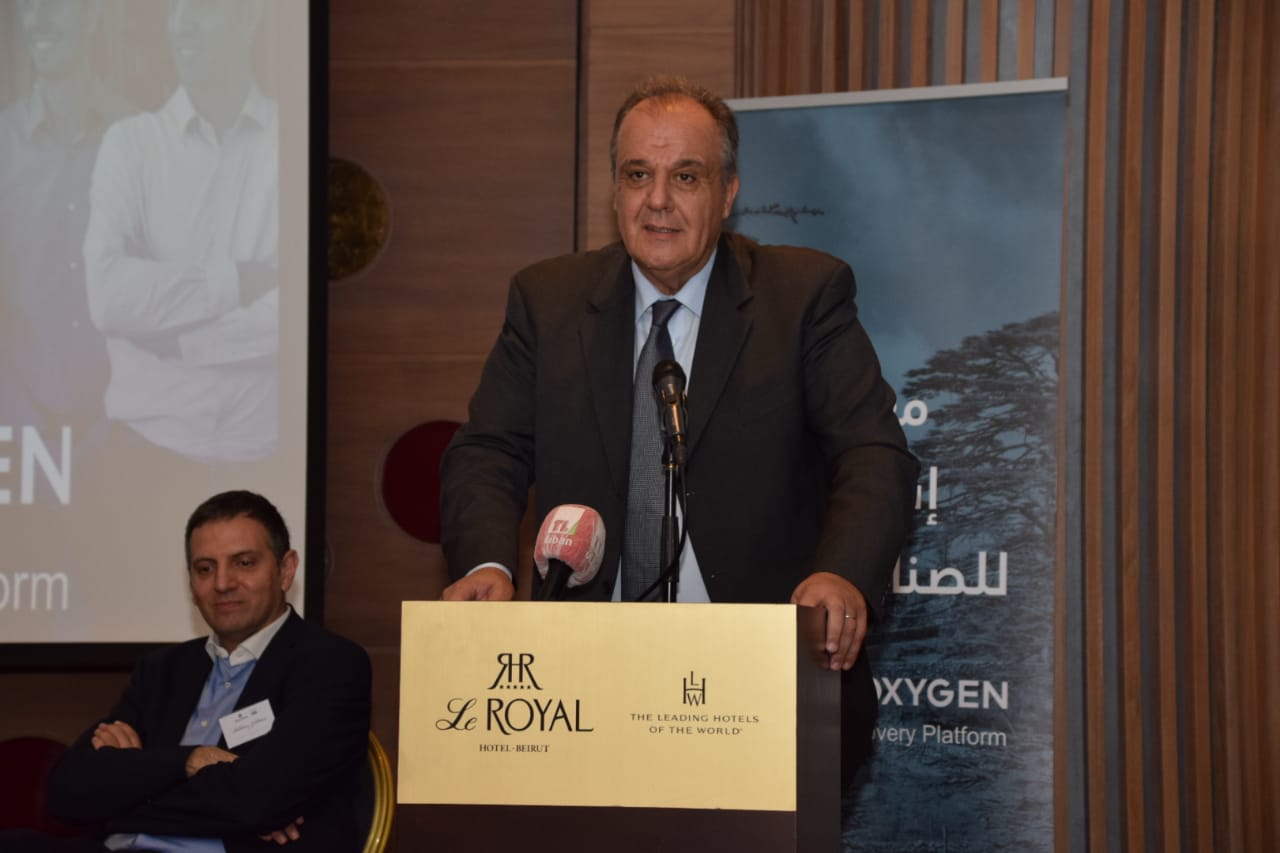 Under the patronage of Lebanese Minister of Industry, George Boushekian, the Cedar Oxygen Fund organized a meeting with the Metn industrialists, as part of its tour across various Lebanese regions to introduce its array of financial solutions. The meeting was attended by President of the Association of Lebanese Industrialists (ALI), Fadi Gemayel, President of the Metn Industrialists’ Association, Charles Muller, Chairman of the Industrial Finance Committee at ALI, Sakhr Azar, founder and Chairman of the Board of Directors of Cedar Oxygen, Alexander Harkous, along with staff members and over 50 industrialists and media professionals.

Harkous indicated that “the Cedar Oxygen initiative was launched amid a dreadful economic crisis facing Lebanon, stemming from the Fund’s commitment to the country.” In Harkous’ words, the Fund’s main objectives can be summarized as follows: Supporting industrialists and companies, preserving the labor force, creating new job opportunities, maintaining the continuity of the industrial sector, and developing it in a way that improves export rates and ameliorates production quality, giving it a better chance at competing with international companies. He explained that “the Fund had expanded its financial facilitations – which earlier included the financing of raw materials – to cover the purchase of renewable energy equipment, revealing that, in order to achieve this goal, $5 million was employed during the past two months and another $35 million will be invested until the end of the year.” Harkous concluded his address by saying: “It is indeed a long journey. We are considering further initiatives, broader plans, and other ambitious projects to be achieved with the cooperation of all concerned parties for a better and more successful future for the industrial sector, and through it, for the Lebanese economy.”

In turn, Gemayel pointed out that the idea of ​​launching the Fund came in parallel with the arising issues in terms of outbound transfers. “We thus resorted to the Central Bank to demand a solution, after having drawn a clear picture of the reality of the sector which exports about $3.1 billion out of the total industrial production, which amounts to $13.1 billion in total. Given the fact that this production requires importing raw materials at a cost of $3 billion, which is equivalent to the volume of exports, it was deemed not to constitute any pressure on remittances from Lebanon, so the Central Bank approved the proposal and a group of prominent Lebanese living abroad and working in the field of stock exchange and finance welcomed the idea, hence the Cedar Oxygen Fund’s establishment. The aim was, first and foremost, to finance the purchase of raw materials for production, next to the possibility of developing investments in machinery, equipment, and energy supply.” Gemayel finally appealed to industrialists to seize this opportunity and benefit from the Fund’s facilitations.

In his address on the occasion, Muller saw that the industrialist’s attempts at steadfastness had become impossible, especially after all their deposits and savings had been robbed and all their sources of funding cut off. “Despite it all, everyone expected industrialists to fulfill their obligations at home and abroad.” Muller pointed out that “the main challenge now lies in sustaining workers and employees, and securing the minimum livelihood requirements for them, despite the drought in resources.” He regarded this meeting as a proof of the Lebanese industrialists’ resilience and their attachment to their country. “It corroborates their keenness on work and production, and affirms that the Lebanese are creative in devising non-traditional means and methods that bring about solutions.” Muller concluded his statement by describing the Fund’s initiative as a glimmer of light and hope in the middle of this dark tunnel.

Azar pointed out that the Cedar Oxygen project was a sliver of hope amidst these dreadful circumstances, adding: “We hope that we have found our path in this unparalleled project, and that it will be the first of many ideas and plans that draw a practical road map for Lebanon to be restored as a beacon in the East.” Azar encouraged industrialists to take advantage of the Fund’s loans, stressing that the financing committee will form the link between the two parties, so as to facilitate the work process.

Boushekian, in turn, stressed that “the Cedar Oxygen Fund is a rescue idea for an industrial sector that has been struggling due to the exacerbation of the crisis over the past two years.” He noted that the Fund was established for the sake of industrialists and for lending them according to acceptable terms and for a medium term. “Industrialists are essential partners in the process, and had it not been for the trust in them and their creativity, the Cedar Oxygen team would not have undertaken this project,” he said, stressing that trust and transparency are the basis for benefiting from the Fund’s objectives. Boushekian also stressed that “the Ministry of Industry is not absent and is following up on pending dossiers with the Ministry of Finance and the Central Bank.” He pointed out that exceptional circumstances require exceptional solutions, and the Lebanese always excel in finding flexible solutions that fit the requirements of their reality. “This initiative secures to the industrial sector continuity and the possibility of expansion into new markets,” he concluded.

The General Manager of Cedar Oxygen Lebanon, Anthony Jabbour, tackled the financial facilitations provided by the Fund to Lebanese industrialists, and detailed their terms and objectives. For his part, Executive Director of the Dairy Day factory, Imad Mansour, shared with the audience his experience with Cedar Oxygen, and his firm’s success in increasing its production capacity owing to the assistance provided by the Fund.